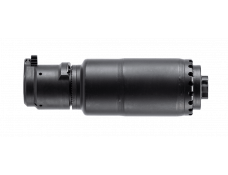 Fits NATO A2 Flash Hiders. ***NOTE: THSF Recommends to use shims to time your A2 flash hider and do away with the crush washer that is normally used.***

When using a suppressor, the gas blowback in the face of the operator is not only disturbing but also a health risk, especially on indoor ranges. The new RBS suppressor significantly reduces the amount of combustions gases from the ejection port and charging handle.

As sensible as the use of silencers is in police and military applications, the escape of the retained gases from the ejection port and charging handle has various disadvantages. With the new RBS suppressor B&T addressed these issues. The new low-pressure chamber design allows to absorb a significant amount of gasses thus reducing the back pressure, which makes the RBS a great choice for semi-automatic carbines, assault rifles and machine guns.

While normal suppressors will increase the speed of the bolt up to more than 30% due to the backpressure, measurements have shown that with the RBS the increase is only about 4%., which will reduce wear and tear on the gun. This is due to the special design of the first expansion chamber, which cuts the pressure in less than half the time and thus avoids backpressure. A further advantage is the significantly reduced fouling of the system.

The new design only minimally increases the size and weight of the suppressor compared to conventional silencers, while muzzle flash and noise are suppressed similarly well as with the proven B&T suppressors.