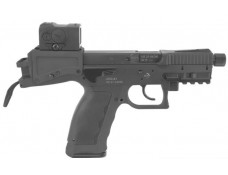 In order to react to the quickly changing threats faced by police forces all over Europe, especially those threats presented by Islamic terrorist, law enforcement needs to quickly rethink its armament. The recent terroristic attacks have proven, today’s police side arms are not able to cope with an opponent armed with military assault rifles and bomb vests.
This is the main reason for the development of the Universal Service Weapon (USW). It was to designed to be a weapon which enables the first responder, thus the normal patrol officer, to intervene effectively in the event of a terrorist event. It is also a sidearm that is suitable for every kind of “normal” police work.