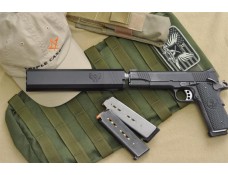 With the modern combat handgun in mind, Silencerco set out to create a silencer that performs well and looks like it belongs, the best possible marriage between host weapon and silencer. Silencerco went to work to make a suppressor that maximizes sound suppression levels, allows the use of more host pistols with factory sights, and has more operationally friendly features. What was created was the Osprey pistol silencer available for 9mm, .40 S&W, and 45ACP.

Although round silencers are very effective for many applications, for a centerfire handgun round it has its limits. To obtain the most suppression, silencers must have as much internal volume as possible; but for a round tubular silencer, the only way to acquire more internal volume is by increasing the overall diameter and/or length. Increasing a tube’s diameter will obscure the site picture of the host gun and inhibit the possibility of holstering a weapon with the silencer still attached to the host gun.

The Osprey is an eccentric silencer, which means that the bore does not run down the middle of the tube. Because of this eccentric design, most of the baffles and internal volume is beneath the centerline of the bore and out of the way of the gun’s sights, thus leaving the shooter the ability to use factory sights with little or no sight or target obstruction. The Osprey has flat side walls and angled edges that mimic many modern combat handgun slides and is just slightly wider than most host pistols. This feature allows the host weapon to be holstered with many popular open bottom holster designs with Osprey attached. The Osprey contains approximately 30% more internal volume than a traditional round tube silencer at the same length, but does so without obscuring the shooter’s sight picture or adding excessive width and length.